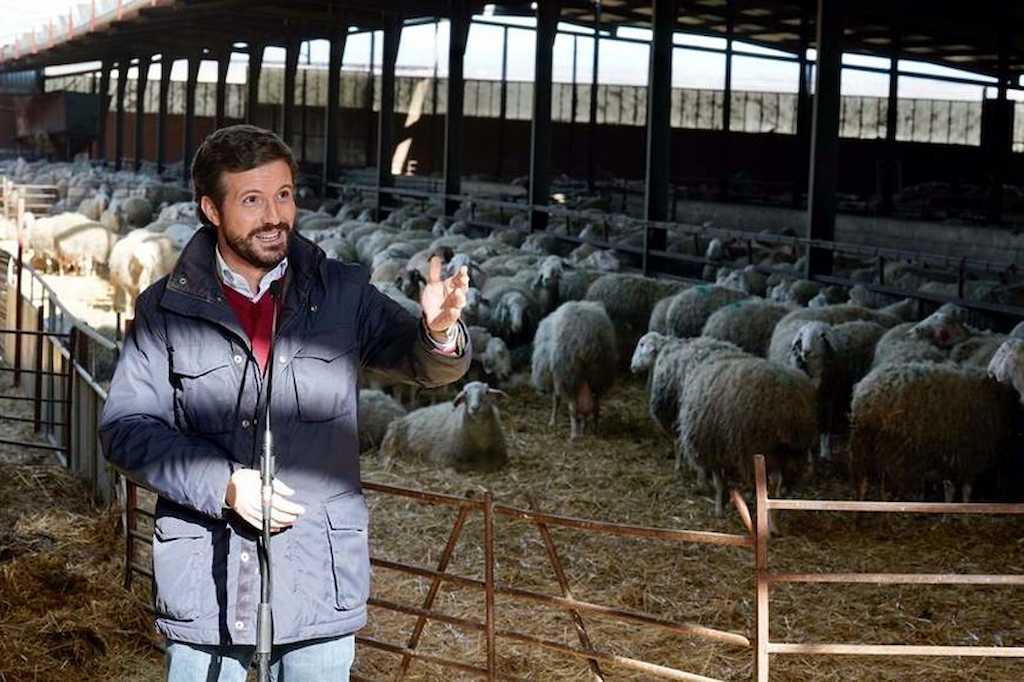 Pablo Casado has done it again. He has taken the suitcase, has gotten into a car and has planted himself in a lost farm in Castilla y León, that is, the emptied Spain. There, before a crowded crowd full of sheep, he has posed for election press photographers and has dedicated himself to giving the Government tow without rhyme or reason with his usual panoply of lies, hoaxes, manipulations and half-truths.

In reality, Minister Garzón's controversy over the macro-farms was enough for a couple of days of headlines and gatherings and stop counting. But that's how Casado is, when he takes a line there is no one who can stop him. The man has seen chunks and veins in the area and he is motivated by nothing other than the macro-farms. For him there is no other important issue in this country, neither the economic situation, nor corruption (he has many open cases that affect the PP kicking in the courts, but he never talks about that) nor even the conflict in Ukraine that can trigger the Third World War at any time. Macro farms, macro farms and nothing but macro farms. Apparently, he must have believed that citizens are thinking about this issue all day, when the issue of meat quality ranks 1,528th in the ranking of concerns of the Spanish. But he believes that this is the ultimate bomb that can end Sánchez and he is going to exploit it to the end. Poor guy, let's leave him with his delusions, which immediately goes away.

Married lives a constant day of the groundhog (in this case of the sheep) and he is no longer interested in anything else, well yes, European funds, that other obsession that has him trapped, that other windstorm that often hits him without anyone know very well why. Isn't it a good thing for Spain that the gentlemen of European capital get splendid for once, turn on the ECB tap and spray us with 140,000 million euros that will come in handy for us Spaniards? Isn't it a miracle that all that shower of money comes to us? Well, no, there is Casado, messing around every day so that they take away our aid. What a kid, what a deviant has the point of view of political strategy. And in those it is. When he is assailed by the neurosis against the manna that has to come from the EU (a recurring mania that only he understands) he wanders around Brussels, rants for a while before the community leaders, airs out a bit, takes some Bruges chocolates , which are relaxing, and again for home. And that's how the leader of the opposition works. To impulses, to outbursts, to teleles. Pure irrational viscerality, pure demagoguery. As when he says that the macro-farms do not exist or pollute despite the fact that all the data denies him and the inhabitants of the emptied Spain are fed up with intensive farming.

But the fact that the leader of the PP frequently escapes to the farmhouses away from the madding crowd, like the goat that he throws into the bush every time he has a brilliant idea to communicate to the country, begins to have the Freudian side of him. What is the reason for this irrepressible mania that has entered him for walking all day in pens, pigsties, pigsties, stables, chicken coops and dairy farms? Get out of there, man, you're going to wear your patent leather shoes! Today the great Javier Aroca has rightly suggested that the Popular Party boys shamelessly disguise themselves as rural people when they have to go to the countryside to plunder the vote of the emptied Spain. As they are naturally posh, when it comes time to campaign, see these days in Castilla y León, they run to the expensive boutiques of Madrid to buy checkered berets, boots and corduroy vests and pretend that they are more from the countryside than a jug. They believe that, in this way, looking like hicks, they will hit the ground running, convince the undecided in the countryside and get thousands of votes. Actually, that way of campaigning is disrespectful to those who live in the interior, as well as a ridiculous and failed strategy, since the people of the town are wise, they do not give them cheese as easily as they think and when they see a transvestite young man from Paco Martínez Soria arrive, with a fake cane and a plastic hen in a cage, they spot him a mile away. In other words, it bothers them that they are taken for idiots from the provinces, so that they will end up voting for those from Soria ¡Ya!

It is clear that Casado sees the town as a herd of sheep, that is why he enjoys surrounding himself with sheep, which is a perfect metaphor for the populist demagogue who attracts the masses and who begins to give a lot of grime for what he has of degradation of democracy and of itself. Tierno Galván has already said that in politics he is in contact with filth and one has to wash himself so as not to smell bad. The bad thing is that the eternal candidate for president is taking the axiom of the great professor too far and is beginning to show clear symptoms of hooking and hanging dangerously on the ticket. He insists on getting into slurry and manure, over and over again, to perform the circus act of the candidate aware of the rural world who holds a tender little sheep in his arms, like that Carmen Sevilla who blew up television audiences in the nineties. Obviously, Casado aspires to be the Carmen Sevilla of today's politics and already dreams of electric sheep all the time, like Philip K. Dick's androids. He sure falls asleep at night counting sheep in the Moncloa gardens. One day he will learn that animals have souls, are intelligent and eat everything. That is why, when he drops by a macro-farm to do the variety show and grill in front of the poor animals, the false smile of a toothpaste seller, the sheep stop ruminating and look at each other strangely to ask themselves: But What hatchery did this guy come from? Bee.