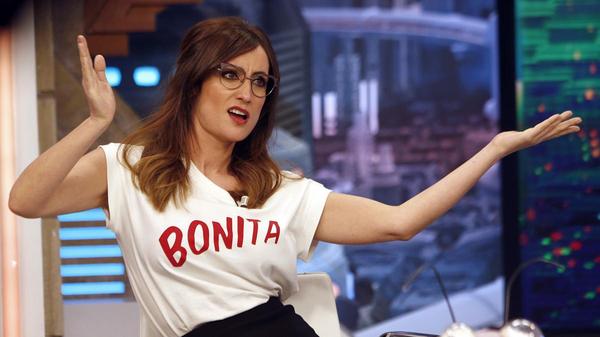 The presenter, actress and comedian Ana Morgade has become a regular face on the small screen. Her peculiar way of working has established her as one of the references on television, where she has been able to demonstrate her good work in programs such as Zapeando or El Club de la Comedia, where she made us laugh out loud with the monologues of she.

But the comedian is not only a benchmark for her professionalism, but also for her style, which has always been very characteristic and that gives her the most special touch to her personality. Makeup, hairdressing and outfits that have inspired many, and it is that the presenter's look, with an accentuated retro touch in clothes, makeup and her characteristic glasses, have become her personal brand.

The singer cut her characteristic long hair a few months ago, and has given a slight change to her image, which is now more inspired by the 80s era. Something that seems to have displeased one of her followers, who did not hesitate to criticize a of her latest images of the collaborator, in which she poses with one of her usual outfits.

For the follower, Ana is “a hottie”, but she “makes an effort to dress you like my aunt in the 80s”, she says, adding that maybe she does it “so they don't accuse you of promoting patriarchy or something”. The follower goes further, and he states that she was "better" when the presenter dressed "from the 2020s".

A comment that the comedian herself did not let pass. Yu's presenter, on Europa FM, claimed on Twitter that "I don't shut up anymore" and she doesn't plan to let anyone insult her on any social network.

It is not the first time that Morgade has had to face the insults of some of the users of social networks. A few weeks ago, the actress asked Twitter for protection to help her fight the trolls who dedicated all kinds of insults and threats to her.

Fed up because those responsible for the social network did nothing, Morgade herself did not hesitate to publicly denounce what was happening, showing how Twitter considered that threatening her did not imply a breach of the rules of the social network.

The comedian has always been very clear with her style of dressing. We only have to remember one of her last appearances, during the green carpet of the Seminci, the International Film Week in Valladolid, to which she went dressed in a suit bag, to the surprise of all those present.

The presenter thus wanted to denounce how uncomfortable she felt with her own red carpet dresses: “The same thing always happens to me: in showrooms I can hardly ever wear what I like, I have to wear what fastens me,” she declared, “I The bag looks better than the suit… And voilà. Here I am, ladies. Proud and happy, with a suit that doesn't squeeze me, doesn't pull me, doesn't scare me, and represents what I am, better or worse: a comedian. And you know what? It's the first time I don't feel like putting filters on the photo."

Ana Morgade, outraged because Twitter does not consider that insulting him violates its rules

Drafting
show comments
At the minute